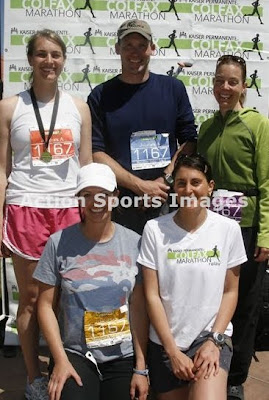 Team Jviatiors A (me, Scary, C-dog, Utah, Little Italy), aka 4 people faster
than me that may have gotten me the only sub-4 marathon finish I'll ever have.
Well since I ran the Colorado Marathon just a week before this race, I wisely realized that it probably wouldn't be my smartest move to try and run the Colfax Half again this year. Though I really enjoyed it last year and kind of wanted to try and beat my 2009 time, over my last several months of "running smarter," I did actually learn something. I learned to keep the big picture in mind, and not sacrifice my lifelong running "career" for one measly race. So, I didn't register for the Colfax Half. However, if you paid attention to the title of this post, you see that instead, I got myself1 onto a relay team. I ran the anchor leg of the relay, which in my opinion was the best part of the race, for several reasons.
One: the race started at 6am. However, I only had to show up for the final 5.3 miles...which meant sleeping in and rolling into my relay exchange point about 8:30. Lovely!
Two: My leg was through the lovely LoDo, then past all three of my former work office buildings, along a short piece of Colfax, then through City Park. Splendid!
Three: I got spectators and finish line goodness. Delightful!
Four: Plenty of paparazzi race pics due to photos positioned near the start/finish of the race. Fabulous!
Five: I got to encourage all those full marathon runners around me in those last 5 miles, when I knew they were feeling it. My team finished in 3:51:06, so those were my fellow middle of the pack peeps I was boosting. Just one short week after my own full marathon, I knew first-hand how helpful that support can be. Fulfilling! Rewarding! Memorable! 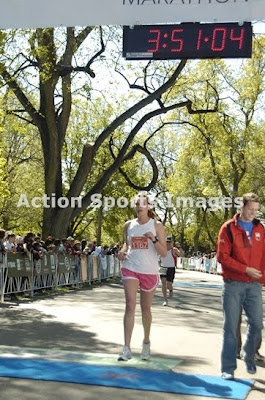 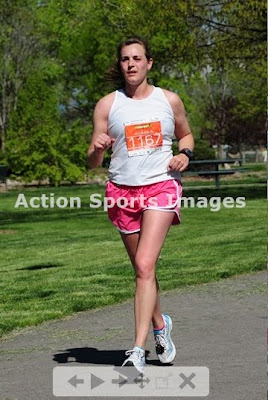 One of the paparazzi shots where I don't look tired.
There were very few of those.
Seven: I spotted my HRRC running buddies, who were there to help support fellow HRRC first-time marathoner Massud, just as I came into the park for the last couple of miles. Marvelous! 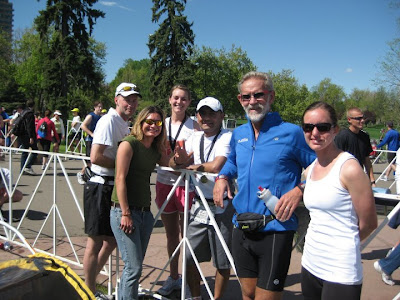 So, it was a great, fun relay event for me. Our team ran well, had fun, and spent some quality time outside of the office. It was fun to hang around after the race and just chat and relax (usually I have hubs and the shorties there, and they are anxious to go but this time I was alone). I enjoyed this race last year, and it was my first half marathon so I really didn't have much experience to measure it against. But this year, older, wiser and with more long races under my belt....I still enjoyed the race. And I think it was much better organized than last year. Plus they finally got with the program and had tech tees for the race shirts. (Thanks Kaiser Permanente!) 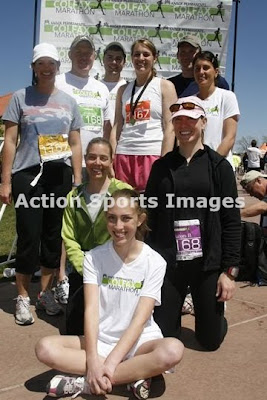 1 - what I really did was convince 9 of my colleagues to join ME in forming two teams, so that I could participate in this race
2 - Less "cake" more "dry, stale, bran muffin"; I can't lie, my legs were tired one week post-marathon, even only doing 5 miles