How Glad Am I Not To Be Wearing The Boot in The Blizzard?

20" of snow at my house, so far. Still snowing through the day.

In running news, I did manage to complete 4/10 mile (4 laps at the indoor track) on Tuesday night. No pain, no tenderness. Progress. Though I am thinking I won't be doing the running club group run scheduled for Saturday morning. Unless at least 10" of snow can melt by then...
Posted by M2Marathon at 12:15 PM 4 comments:

The Boot Gets The Boot

Well running friends....my AWOL time is nearing its end. It has been 3 weeks and 3 days since I fractured my metatarsal and was confined to The Boot. Per the doctor's instructions, I have behaved, worn the boot, and let my foot heal to the best of my ability. It is no longer tender, nor in pain...I can walk without a limp. I spent the weekend around the house sans boot, and still all felt fine.

I have been swimming and lifting weights in my forced running sabbatical. On Saturday, I tried my old yoga class to see how the foot held up. All was well. Sunday I did a test lap on the track after my weight/core session...and, well, one lap was all I managed. The foot felt a little weak (to be expected) yet not exactly painful. It was somewhat tender afterward, so I decided I will give it another week before trying running again. Also, I believe that my 10-month old shoes with 700+ miles on them may have been somewhat of a causal factor in the fracture in the first place. On my test lap, I was very, very aware of what my footstrike was doing; I felt a distinct oddness/hollowness in the forefoot of my right shoe; just in the area where my stress fracture occurred. Why didn't I notice that before I broke my foot?!

Anyway, who doesn't love a reason to buy a new pair of running shoes?! Perhpaps in pink this time, rather than blue?! Asics 2140's here I come...
Posted by M2Marathon at 10:43 AM 6 comments:

Warning: this post is not about running. Males may want to disregard at this point...

I am in Austin for work this week. One thing I was really looking forward to doing while here, is going for some good runs on the lovely local trail system. Since that ain't happening, I guess I will have to focus on work instead...booo. Or try the lap pool at the schwanky hotel spa. Ooh, and the steamroom, definitely the steamroom.

Anyway, while frantically gathering all my crap to pack last night, I came across one surprise benefit to having a broken foot. Typically, it takes quite a bit of strategic planning to pack for a work trip, especially when there are also "casual" activities on the agenda. I am forced to choose shoes that do at least double-duty. I am forced to choose outfits that correspond to those that certain pairs of shoes. But NOT this time! Fancy heel that only goes with one dress? Bring it! Clarks Wallabee? Why not! Black flat? Toss it in! Comfy mid-heel? In you go!

Because I only have to pack ONE shoe (the left one), I was able to include twice the shoeage! And I could choose my preferred outfits, not just the ones that would go easily with my shoe. Also, I did not have to pack 3 running outfits...so that lightened the load. Unfortunately, I am not sure the presence of the perfect shoe on the left foot can overcome the distraction of the hideous black boot on the right. Sigh.
Posted by M2Marathon at 3:37 PM 4 comments:

Email ThisBlogThis!Share to TwitterShare to FacebookShare to Pinterest
Labels: "cross" training, boo/yay, on the road, running-NOT

Denver Marathon Gets The Boot

Well, boys and girls, despite all your well-wishes and my fervent hopes (bordering on anti-fracture prayer obsession), I am indeed today in a boot. Stress fracture on second metatarsal bone. 3-4 weeks of no running and limited walking. Spectator status for the Denver Marathon on the 18th.

Luckily, I am well past the crying phase and have moved into the, "hey, my foot doesn't hurt as much with this big bad-ass boot on," and my persepctive has shifted. 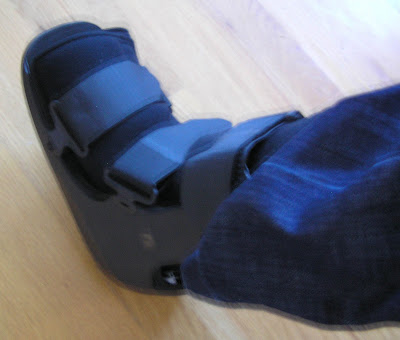 Good things about my broken foot:
- The bone I broke heals relatively quickly and generally without complications or future issues
- No high heels for a month
- Boot is black--as opposed to the electric blue one I had when I broke my ankle and had surgery on it in high school--and therefore matches all of my clothing
- No surgery
- No crutches
- Getting sympathy votes
- More time to read
- Running timeslot(s) can become daily meditation timeslots (more on that later)
- Driving the electric carts at Target
- Good reason to finally try swimming again
- Less laundry, without running clothes to wash

Bad things about my broken foot:
- No running for a month
- No Denver Marathon, which means no extra-special Mile-High Experience medal
- Snow season is approaching--like, tomorrow--in Colorado
- Though black, boot is still ugly
- Driving a stickshift? Not so easy
- No running for a month
So, as you can see, the list of good things is actually longer than the list of bad things. Yes, I am really disappointed I don't get to do the race in a couple weeks (I really wanted that extra medal, dammit). My one big goal for 2009 was to run a marathon. Finally, after so many years of running, I committed myself to prepare for it and do it. I stuck with it, through ups and downs, intervals and lsd runs, and I was this close to making it....then, BOOM: failed.
And then yesterday I was thinking and it occured to me that I had run two half marathons this summer. A half, plus a half equals....a whole marathon. So, technically, I did achieve my goal of running a marathon this year; just not the way I had imagined or planned to do it. But life rarely gives you just what you are expecting; and that doesn't make the accomplishments any less valid or the ride any less fun. So, though disappointed, I am now actually kind of ok with the whole situation. Course, I may feel differently when the painkillers have worn off.

Seriously, I might just cry. Seriously. I mean, seriously.

Rewind to Saturday. I ended up going for a run in the afternoon instead of the morning. I went on the nice, soft dirt trails at about 3:00. Beautiful day, feeling good...except for a very slight discomfort in my right foot. Ah! My shoe must be tied to tight. Easy to fix. Shoe loosened, continued on run. Foot discomfort gets more pronounced. 3 miles in, foot discomfort is now actual pain. Every strike of my right foot: pain. I stop to stretch, thinking perhaps it's a cramp or a tight muscle somewhere. Continue on run. Enter stronger foot pain. I now cannot run but must walk and the whole situation is bringing stinging tears to my eyes. I still have a mile home, I am in severe pain, and yet it's a beautiful fall day, the kind you just live to run for. My race is in two weeks and this feels like a very, very bad sign.
Flashforward to today. My foot is still in pain, it is swollen, I cannot walk without a limp, cannot bend it, cannot do steps. I fear fracture. Tomorrow I go see some fancy schmancy foot specialist that happens to be here in Vail (which, Vail, by the way is faaabbbbuuulooouuusss, it even snowed the pretty kind of powdery mountain snowflakes tonight). I have resigned myself to the distinct possibility that I will probably not be running my first-ever marathon in two weeks at the 2009 Denver Marathon. (SOB!) But I guess as long as I can heal whatever is wrong, and eventually run again....I'll be all good. Right after I stop crying and feeling sorry for myself. 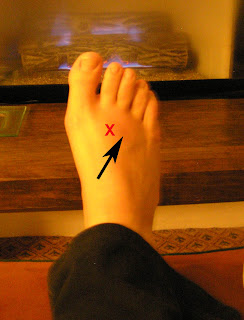 The "X" being the spot in which centers the
severe pain; the arrow pointing to the region
to which the general swelling and puffiness radiates.

Back in the Saddle

Thanks guys, for your well-wishes. And Jeneric, you are right; I think I will have a great marathon experience, regardless of my time or whatever life throws at me. I am just too excited for the experience, not to enjoy it! Thanks for reminding me of that.

And, after a week of ill, I am finally feeling better and got back in the saddle and went for a run last night. I managed 25 minutes, and it wasn't as bad as I expected, but I certainly wasn't challenging any land speed records. (Or any underwater or outer-space speed records either, for that matter.) It felt like 6 days of illness had managed to undo 14 weeks of training. However, tomorrow morning I am back with the running group for a long run on my favorite Highline Canal; here's hoping I can still breathe afterward. Then Sunday I am off to Vail for a company retreat for a few days, and will try some at-altitude running to see how that goes. Running amidst the yellow aspens is just too enticing to pass up!

Happy weekend everybody, and good luck to those of you racing this weekend!
Posted by M2Marathon at 11:46 AM 6 comments: